U.S. Soldiers Murdering Civilians is an Anomaly in War 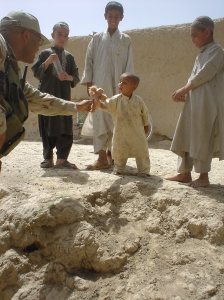 Peter Sessum "killing" a kid with kindness. Contrary to recent articles, passing out stuffed animals was routine, hurting civilians was not.

In 2010 in my mass media law class at the University of Washington a student stated matter of factly that soldiers are specifically trained to target children. I don’t really blame him, he is only going off of information he hears. I blame the people who say such things.

Like Chris Hedges in a recent article trying to pimp his new book. He says that murder is not an anomaly in war. Like many who write with an agenda, he puts a lot of information together to lead the reader to a specific conclusion.

The drone strikes, artillery bombardments and “the withering suppressing fire unleashed in villages from belt-fed machine guns” all paint a very specific picture. He says that it would not have made the news if an “American soldier had killed or wounded scores of civilians after the ignition of an improvised explosive device against his convoy.” The irony of this is that he says to single out the massacre of 17 civilians in Panjwai is to know nothing about combat. In fact, he is banking on the reader to know nothing about combat; otherwise you would think he was full of crap.

For example, “suppressive fire” is something very specific. By definition it is not used to kill but to have the enemy keep their heads down. Usually so friendly forces can maneuver safely. Suppressive fire used in an Afghan village would affect the local population too, they would duck under cover as well, thereby being safe. When shots are fired, people in warzones duck.

I would also like to ask Hedges how it would be my fault that someone initiated an IED on my convoy. Isn’t that the  bombers fault? Couldn’t he have waited until the next convoy? Wasn’t it his choice to detonate the IED when there were civilians around? Does Hedges side with a husband who says, “It is her fault I beat her” because I believe that people are responsible for their own actions.

Hedges also compares soldiers in Iraq and Afghanistan to the Serbs in Bosnia and death squads in El Salvador. If you think the three are pretty much the same thing, you should stop reading now.  Mainly because you are an idiot and aren’t going to like what I have to say anyway.

Genocide, culture and politics aside, there are a couple big reasons that Hedges is again using editing of information to lead the reader to a specific conclusion. He says that Salvadorian fighters fought for four years or longer and speaks of a 19-year-old who broke down after fighting for five years. The reader’s conclusion is that U.S. soldiers in Iraq and Afghanistan have been fighting for just as long, so they are all kill crazy too. The information needs to be deconstructed to get to the truth.

Anyone that had been fighting a war since they were 14-years-old would suffer incredible trauma. Any 14-year-old that had been fighting in a war for two weeks would be severely traumatized. It is one of the reasons why enlistment age is 18. Some would argue that even that is too young to see some of what soldiers see. There is no 19,20 or even 21-year-old American service member that has been fighting for five years straight.

There is one more piece of information that is not being considered, U.S. soldiers get to go home. That makes all the difference in the world. Even if the Serbs were only fighting one year tours, they were still stuck in Bosnia. Leaving the front line fighting to go live in a war torn country isn’t really getting away from it all.

When I step off a plane back home, I leave all that ugliness behind me. I get to go back to being the guy that picks his kid up from school. No one drops mortar rounds in my neighborhood, there is no sporadic gunfire in the distance and my kid can play in any field without the fear of landmines. The situation of the average American soldier cannot be compared to someone fighting in the Balkans in the ’90s or a Salvadorian death squad member.

It is articles like the one Hedges wrote that actually make things harder on our returning veterans. Being treated like we are all murderers does not help our readjustment into civilian life. A National Guard  or Reserve member might not be around people who understand what he or she went through and having to go back to the same job with everyone treating you like a baby killer is going to make things worse.

Hedges is engaging in irresponsible journalism and the people who mindlessly forward his article or post it to social media are not thinking about what they read. When dealing with a complex issue, people have to think about what they read. The irony of a journalist telling readers to not trust everything they read is not lost on me.

When reading about military issues don’t just trust someone who has an agenda, ask a vet. Get their insight; it is the best way to get more information. If nothing else, ask us here at the Dog Tag Chronicles, after all, it what we are here for.

1 Response to U.S. Soldiers Murdering Civilians is an Anomaly in War