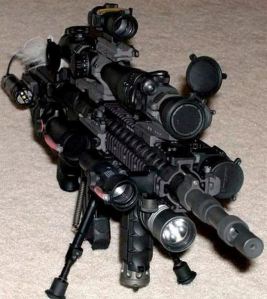 The ultimate geardo rifle. But there is still room for a couple more attachments.

This is one of the reasons that grunts hate POGs. Those that don’t do shit demand the respect that the military doesn’t run without them but want to treat dirty grunts like they are lesser. This may not be the mentality of everyone that isn’t combat arms, but the mentality is too prevalent in the military.

I went from being Infantry to Psychological Operations and it was a huge shift in mentality to me. At the time, PSYOP fell under Special Operations Command so many of the soldiers were acting like they were Special Forces once removed. Yet few wanted to put forth the effort to be improve themselves. And why would they? They were already as hardcore as could be right?

The attitude was Special Operations soldiers kick down door, I am in Special Operations, therefore I can kick down doors. It made all the sense in the world to them. But every class that would come up, they would blow it off. Why learn land navigation when I have a GPS? Why learn convoy operations when I won’t be leading a convoy or driving? And my person favorite, “I don’t need to learn that, I’m not a grunt.”

So there I was, on Bagram, no shit, and my First Sergeant comes up to me and asks to see my rifle. I cleared it, handed it off to him and went back to what I was doing. I didn’t need to watch him because I knew my rifle was spotless. He handed it back to me and said he had to check because my platoon sergeant’s weapon was filthy. Of course it was, SFC B. was a POG. Since he hadn’t fired it, he didn’t clean it. Even though I hadn’t been on a mission in a couple weeks, I cleaned it because Afghanistan is still a dusty country. I didn’t think anything would happen on one of the biggest bases in country, but you never know.

There are plenty of people who can kick ass that are not in the Infantry. I can name people that are not in combat arms jobs that I would trust on my fireteam. Being a POG isn’t about type of job, it is a state of mind. Unfortunately, there are some grunts with the POG mentality. Fortunately, they don’t last that long.

Gomers are POGs, or worse yet, civilians that want to think they are high speed. Also known as “If only Rangers.” As in “If only I joined the Navy, I would totally be a Navy SEAL.” They want to talk to grunts about “being in the shit” because they played a lot of Call of Duty. I actually had a guy talk to me about the Barret .50 cal and Mark 19 grenade launcher. I almost punched him when he said, “You press X to reload.”

Or they act about how they know what it is like to go to combat because they played paintball with their cousin last year. Anytime a person can go running off the “battlefield” to show a booboo to their mommy, it isn’t that hardcore.

Don’t get me wrong, I love paintball. I especially love it because it isn’t real. My style of play to intentionally be more reckless because it doesn’t matter. No matter what I do, everyone is alive after each game. It must be what Michael Phelps feels like at a pool party.

Because of that, I used to wear non camouflaged cloths when I played. Cammies don’t make that much of a difference in a paintball scenario. Later I started using old uniforms just so I wouldn’t ruin my street clothes.

If you want to see some real gomers, check out the people who play airsoft. They spend hundreds of dollars to look like a SpecialForcesDeltaRangerNinjaSeal. (Yeah, that is all one word) I saw a 17-year-old kid wearing the Special Forces, Ranger and Airborne Tabs. I get that this is his make believe, but the people who do that shit for real don’t think of it as tribute, they laugh at the gomers. Why would you want to pretend to be someone that would laugh at you for pretending to be him? If you want to wear an SF tab, go out and earn one. 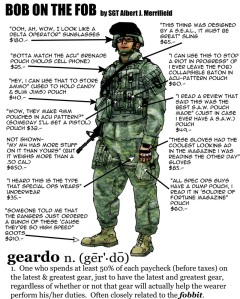 You know how you can tell a geardo? His gear is new and pretty in every picture.

A geardo is a gomer that is actually in the military. Also known as “gear queers” they get all the latest cool guy gear and wear it around the basecamp. They have the ultimate tricked out M4, but don’t know how to use any of the attachments on it. It is funny watching a geardo carry a 30lb rifle to chow and back to their office. You just know that they are thinking they look super cool.

When possible, I just carried my pistol to chow. I can draw and shoot pretty fast if things get hot and I can fight my way back to my rifle or use the pistol to upgrade to something bigger. On a micro firebase, I might still carry my rifle, but on a huge air base, it is too clunky to take to chow 50 meters away.

Of course the worst of the lot is the geardo with the POG mentality. He won’t take time to learn how to be an effective soldier but wants everyone to think that he is a hardcore mofo. I knew this guy who was just looking for his Rambo moment. He was looking to kick ass and take names but couldn’t fight his way out of a wet paper bag.

As he was getting ready to deploy he went out and bought hundreds of dollars worth of gear. He looked like a character straight out of a movie. When he was modeling his gear to other people, I was actually showing new soldiers what kind of gear I used. No real soldier has pretty gear. It might be clean, but stained and soiled from real use. My gear was a few years old, but I knew how it fit and where everything was. He set all the gear to fit him perfectly, but didn’t take into account body armor. Typical geardo move. Fortunately, POGs don’t have to worry about poorly fitting gear. It doesn’t matter how well it fits when heaped in a corner.

POGs, gomers and geardos are basically harmless. Civilians should never ask someone if they are a POG or not. Being a POG is more of a mentality than a job description. So asking a supply or Intel soldier that actually does their job might offend them. And you will get laughed at by a grunt. Some POGs actually break the wire, and if you have never been overseas, you haven’t earned the right to look down on them. But feel free to fuck with civilian gomers. Especially the if only Rangers, they deserve it.