The Inherent Racism of Star Trek 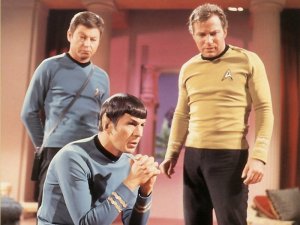 Spock: It is only logical Captain, you are a racist. McMcoy: “Dammit Jim, I’m a doctor, not a Klansmen.” Admit it, you used the voices in your head.

When you say that Star Trek is racist, geeks around the world freak out. They want to point out the diversity in the Federation and lament on how a black woman was fifth in command of the Enterprise in the original series. How can it be racist?

It isn’t the Federation that makes Star Trek racist; it is how the rest of the universe is perceived. The Federation is diverse and open, but every other race is exactly the same. Humans can be whatever they want, adventurers, scientists, farmers or whatever tickles their fancy. Every Klingon is a warrior. A Klingon scientist is rejected by their society and seen as lesser. A human scientist is regarded as an expert in their field, a Klingon scientist is viewed with suspicion and treated like a powder keg waiting to explode because his or her Klingon instincts cannot be controlled for long.

So Klingons are obviously darkies. Full of passion and angry and warlike. Vulcans are the Japanese, all logical and unemotional. Until Pon Far, and then all the repression explodes in a fury of passion. Romulans are the Chinese (Yeah, think about it) and are believed to have shared ancestry with Vulcans. How racist is that? Or course they would think that all Asians are alike. How can people in two different parts of space share roots? To travel to distant planets requires a certain level of technology, so wouldn’t they have some form of records to say that they seeded two different planets? That would not make them Vulcans and Romunalns, they would be whatever it was that they came from. You would think the anal retentive Vulcans would have kept those records.

I am sure you can figure out who some of the other races are. Short, big nose, only care about money, that is the Ferengi. They will do anything for money and if a Ferengi wants to do anything that doesn’t make a lot of money, they are an outcast. Yeah, that isn’t offensive at all.

Why is this on a veterans website? Two reasons. First, this is the shit we talk about on those long nights on guard shift or on downtime during missions. Despite the perception, not all soldiers are hard charging killers. There are plenty of geeks and nerds. Sure, they can shoot you from 1,000 yards away, but they are still geeks at heart. I have had better conversations discussing possibilities of faster than light travel with military members than with civilians.

The other reason why this is here is because that is how we as Americans view the world. Americans are individuals, but everyone else is all the same. An American goes on a shooting spree and we are quick to point out that is the actions of an individual, but hear about a suicide bomber and the reaction is, “They are all like that.” This is evident in Star Trek when a rogue captain goes into the Neutral Zone, the Enterprise will say that there is no call for war, it is the actions of one man. But let a Romulan ship skirt too close to the Neutral Zone and suddenly it is an act of war.

After my first deployment to Afghanistan I sat down with three individuals that would describe themselves as informed, educated and best, left leaning. I heard things like, “They don’t want us there.”

Really? I had to ask how many Afghans they had met and talked to. You can find people in Montana that don’t want the government to tax them can you say about all Americans “They hate the government.” The Afghans did some major damage to the Soviets, the fact that I am alive is proof that not ALL Afghans don’t want us in their country. I have been face-to-face with literally over a thousand Afghans, just in tribal diversity alone there is no one “They” when talking about Afghans.

Of course you won’t see that by sitting on the couch watching television. And it would be difficult have a deeper understanding of the rich culture and diversity of Afghanistan when the country is viewed from behind a gun sight. I admit my perspective is different because my job was to build rapport and to understand the people and culture. I left the conversation laughing about how my year drinking tea with the locals was somehow equal to one person watching a two-hour special on TV.

Putting large numbers of people into a single category is not only a disservice to the people, but can also lead to critical mistakes. Treat an enemy too friendly and they can get close enough to stab you in the back. Treat an ally like an enemy and you will destroy trust and cost a good relationship.

This is where you can take your Mom’s advice and treat everyone the way you want to be treated. You would not want to be treated based on a negative previous experience with Americans. A little cultural awareness goes a long way toward making friends. If you build that rapport, give them your respect. If someone still insists on being a bad guy, give them your bullets. It may be cultural awareness, but it is still a fucking combat zone. You still have an obligation to try and get home alive.

9 Responses to The Inherent Racism of Star Trek