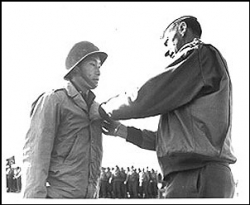 CPT Young Oak Kim being awarded Silver Star by General Mark Clark. His other medals include the Distinguished Service Cross, and other Silver Star, 2 Legion of Merit, 2 Bronze Stars, 3 Purple Hearts, Légion d’honneur, Croix de guerre (which was upgraded in 2005 to France’s highest military honor French Legion of Valor and Taeguk Cordon of the Order of Military Merit (Korea).

When most people think of the “Greatest Generation” they picture a platoon of fresh faced, corn-fed farm boys from the Midwest and one wise cracking kid from Brooklyn. It is the movie stereotype of the WWII American fighting man. For some reason it is always Brooklyn. Rarely do people think of a platoon of Japanese Americans.

May is Asian-Pacific American Heritage Month and the Dog Tag Chronicles is going to take some time to recognize some of our greatest Americans. The Nisei Veteran, the second generation American citizens that fought for their country while many of their families were imprisoned back home.

Disclaimer: There has been a lot written about the Nisei vets from a historical perspective. Here at the Dog Tag Chronicles (DTC) we write from the veteran perspective. While most of the posts by Sessum are written in a particular style, this will have more military vernacular aka grunt-speak. You have been warned.

The Nisei vets are among the best examples of American citizens for three distinct reasons. Their entrance to service, their service overseas and their post war activities.

Signing up
The Niseis are shining examples of American patriotism during some of America’s darkest days. Or at least some of the darkest days of government policy. After the attack on Pearl Harbor, Japanese Americans were sent to internment camps. American citizens, born and raised in America, were imprisoned in camps. In the camps men were asked two questions. Are you loyal to America? Would you fight for the country?

Answer “no, no” you were sent off to another camp because you were high risk. If you answered “yes, no” you would stay in the camp. I would not blame anyone for either set of answers. It would be easy to be angry at your government that put you in jail because of where your parents came from. I think it takes character of high caliber to stay true to a country that oppresses you and I understand not wanting to fight. There are a lot of current Americans that make the choice everyday not to fight for their country so there is nothing wrong with that.

To answer “yes, yes” is amazing. The government has taken everything, moved you and your family to the middle of nowhere to live in a prison camp and a man is still willing to fight for his country. There are no words for that. They might have all had different reasons, but they still volunteered to fight. When the call went out to recruit Japanese Americans, in some areas they came out in droves. In Hawaii, the place where America was attacked, 10,000 men volunteered.

The white officers in the basic training were given psychological training to be able to spot and weed out potential traitors or Japanese sympathizers. Like the Tuskegee Airmen, the Nisei soldiers knew that they had to work twice as hard to prove they were half as good. The officers would send messages to higher reporting on the men. The plan didn’t work out as expected. Instead of proving that the all Japanese American units would fail, they proved that these men were exceptional soldiers. Several earned the Soldier’s Medal for actions performed while still in training.

Going to war
While Japanese Americans served in other units, the Army had two all Nisei units, the 100th and the 442nd. The 442nd remains the most decorated unit in history. While their exploits are legendary, I would like to address two that illustrate the service of these fine men.

Lieutenant Young Oak Kim, was a Korean American assigned to the 100th during WWII. He was offered a chance to be reassigned for racial reasons because Korea was still under Japanese control but he declined reportedly saying “There is no Japanese nor Korean here. We’re all Americans and we’re fighting for the same cause.”

The Americans were concerned about a possible German tank battalion in the area that they were going to break through in German held Italy. Unfortunately, there were no prisoners to question. Kim said he would get a German prisoner.

Let’s break this down. A good plan would be to probe the enemy lines, find a weak spot, send in a squad under the cover of darkness while evading patrols, subdue an enemy soldier and get him back to friendly lines without being compromised. It is, in a word, stupid. But Kim is not stupid.

So he takes a private (which in the Army is like letting the clueless lead the useless) and sneaks under the cover of daylight. Yes, they crept across enemy lines in the daytime because he figured that most of the soldiers we awake at night looking for American patrols. The low crawled across a wheat field and cut through the wire. Kim thought (correctly) that no one would be looking inside the perimeter, instead that they would be looking outside for people trying to come in. Even so, once he was inside the wire, they waited in a ditch until they heard snoring.

Two German soldiers woke up with barrels in their mouths, disarmed and made to low crawl back into American territory. His plan was crazy and awesome enough to work. Murphy’s Law of Combat states, “If it is stupid and works it isn’t stupid.” The intel gathered from the Germans let the Americans know that there was no tank battalion waiting for them and the attack could proceed.

When a General was pinning the Distinguished Service Cross onto Kim he realized that just a few weeks earlier he had been pinned a Silver Star onto the same man. The general called over his aide, took off the man’s captain bars and promoted Kim on the spot. Captain Kim was the ONLY Korean-American to receive the Distinguished Service Cross in World War II. He would later fight in Korea eventually earning the rank of Colonel.

Another story of Nisei awesomeness is the taking of the Gothic Line. Built with forced labor by 15,000 Italians it was a series of bunkers and fighting positions along a ridgeline in the Italian Alps. The Germans had held it for five months when the 442nd and 100th arrived on scene.

They spent eight hours sneaking up 3,000 feet of shale covered mountains with 70 lb packs. Noise and light discipline was in full effect (that means no talking to you civilians.) Men slipped and were injured without making a sound. At least one man (I have conflicting reports) fell 300 feet to his death without making a sound.

This is epitome of hardcore. Normally, slipping and falling gets an involuntary “Shit!” But falling 300 feet? That takes some time. I don’t have the words to describe a man that will fall, knowing he is going to die and have the presence of mind to keep silent so that the rest of the unit can succeed.

After spending all night to get into position, they initiate the attack at 0500. These men must have been exhausted and sleep deprived. They were taking on a force that had kept the might of the American Army at bay for months. Just the fact that they were attacking is a amazing. And keep in mind Murphy’s Law of Combat “No plan survives the first contact intact.” That means, no matter how well you plan something, everything goes to shit when someone pops a can of firefight.

The Gothic Line that had been built over nine months using slave labor and repelled the Americans for five months fell in 32 minutes. With every law of tactics working against them, they broke the line in about the same amount of time it takes to watch a sitcom.

Post war Nisei
Their heroics are amazing, and the men were well decorated for their exploits. Yet they still returned to a country that still didn’t fully like them. My grandfather is still mad at the Japanese for Pearl Harbor, and he didn’t even fight in the war. He just can’t forgive the country so you can only imagine what it was like for men returning from war.

With their families released from prison camps, these men went back to work repairing their lives. Not just talking about the veterans now, but everyone affected by the internment had to rebuild their lives in the country that they were born in. And they still raised good, patriotic American citizens. With every right to be angry, the men and women that had survived extreme oppression by their own government went on to be hard working American citizens and raised hard working American citizens. And patriots too, some even competed in the Olympics for America.

While the rest of the country takes this month to recognize the contribution of Asian Americans and Pacific Islanders, DTC will be reflecting on the contribution of our fellow warriors in the AA/API community. The Nisei veterans are real heroes and one of the reasons why we call WWII veterans the greatest generation.