The Spec-4 Mafia, If You Ask You Lose All Deniability 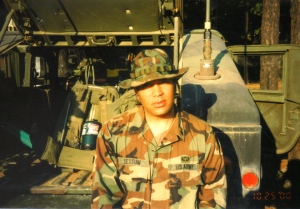 EndEX of JTRC. Less than 24 hours earlier, that truck was packed full of acquired goods.

Recently, I was filling in as a production assistant for a few days and I think I impressed the boss with my work ethic and performance. I joked that they were going to miss me and told Jill, the boss, that in the future she should always hire a vet, specifically one that had been a Specialist in the Army. If you have a lot of tasks that need to be done that require someone to interact with a number of different people in a multitude of roles, it helps to have someone that used to be a member of the Spec-4 mafia. And when I was an E-4, I was a Don. The pop culture reference is Radar O’Riley from M.A.S.H. while he was a Corporal, that is still an E-4 and close enough. Although it works best when it isn’t an NCO.

I know that they must have a similar unofficial network in the AirForce and Navy. Not sure what it is called in the Marines, but there has to be something. In the Army it is called the Spec-4 Mafia. While not a real criminal organization, it is where E-4s (or Specialists) in the Army help each other out. At a certain level, Specialists run the Army. It is the perfect rank, you aren’t a dumb Private but have none of the responsibility of a Sergeant.

For example, the supply sergeant never wants to give anyone anything. He knows exactly how many of everything he has in the supply office. If he gives stuff away, he has to recount his inventory from time to time. Never giving anything away is his way to exert power over others while still being lazy. That is why you never go to the supply sergeant for your supply needs. You check in with the E-4 in the supply room. He or she knows what is expendable and what is accountable. Hook that E-4 up later and you are golden for the future.

I was a Don in the Spec-4 mafia because I got the impossible. It helps to know when to push and when to pull. There are times when you have to approach the other soldier like his best buddy and time when you have to let him think that he would have to be a super hero to hook you up. And then there are times when you have to piss someone off to get what you want. The perfect example of this was when I was PSYOP at the Joint Readiness Training Center (JRTC) at Fort Polk. As attachments, no one knew who we were and no one wanted to support us, even though on paper they were supposed to.

When we arrived, the chow hall was already closed. The chowhall is run by POGs and my guys had already been turned away. There is no way the mess sergeant is going to give us grub. I found a PFC (close enough) and fast talked him into taking care of us. This got to make him a hero for squaring us away. We got a loaf of bread, peanut butter, jelly, fresh fruit and a coffee cake T-Rat tin. We weren’t very hungry so snacks hit the spot.

As attachments, no one really gave a crap about us and the second day into the exercise, our senior enlisted guy just gave up. I could see it happening so I stepped up my efforts. I found the guys passing out ammo and got them to fill up the cargo pockets of two soldiers. I offered the rounds to the rest of the detachment but the Lieutenant said that we would get our official draw the next day. This did not break my heart because I think we all know that I love to have extra rounds on me at any given moment. Bullets are like a lot of things, better to have too many that you don’t need than run out when you do.

This is why the Spec-4 mafia is better than the regular Army system. The Sergeant First Class (E-7) got turned away from his scheduled ammo draw. There was blank ammunition that was assigned to us and he was turned away because they wanted to take care of their own soldiers first. It didn’t help that he didn’t care so he didn’t fight for his soldiers. I know that it was only simulated warfare, but this is sending us into combat without bullets. The worst part is that the Lt had to come to me, hat in hand, to ask if I could get more rounds for everyone else. (For the record, the Lt was former enlisted so of course I did my part, plus he knew how the Mafia worked)

There is an art to creative acquisition. The higher ups can’t know too much or it will seem like they gave the order to acquire the stuff. If they do not appear to be part of it, they can bail you out if you get in trouble. The first time I walked into the tent with an armload of stuff the Lt asked where I got it.

“If you ask, you lose all deniability sir,” I said. He soon stopped asking. 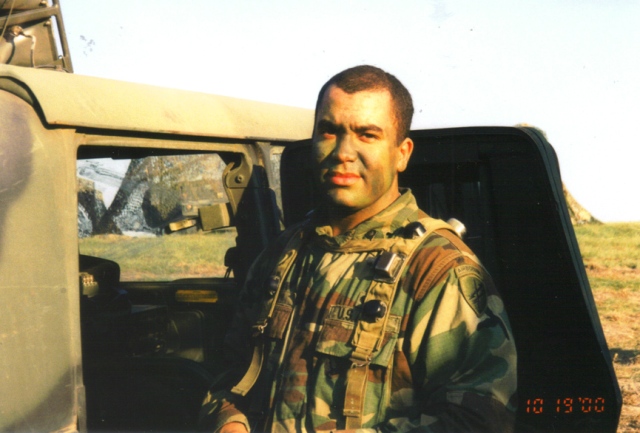 Wouldn’t you trust this face? In the box at JRTC, the Don takes a break.

For the record, they were not ill gotten goods. I always follow a couple simple rules.
1. Never steal anything
2. Someone who has the item has to physically hand it to me
3. No one can get in trouble for giving me stuff

Overall, things were working out pretty well with us getting what we needed through unofficial means until we hit a snag. We needed the impossible, a fuel can. Normally not a difficult item to get, but the unit came from Hawaii to Louisiana and only brought enough water and fuel cans for their vehicles. No one was even remotely flexible on this.

The Spec-4 Mafia itself could not help me, because I would have to violate rules 1 and 3 to get a fuel can. I couldn’t outright steal one and any other Specialist would be in trouble for giving it to me. The best anyone could do was refer me up the chain of command. There was only one thing left to do; I had to piss somebody off.

When I got to the battalion supply officer I knew I had my man. Naturally he blew me off at first. I was an E-4, he was a major that was very busy. He didn’t just kick me out of the TOC, he just told me he would deal with me later. That means, “Fuck off so I can forget about you.”

I politely nodded and stepped a respectable distance away. I quietly stood there at parade rest (feet shoulder width apart, hands behind the back, staring forward for you civilians) and waited. He had already ignored and forgotten about me so this is where the genius comes out. When he moved on to talk to the next person I snapped to attention, followed him, stopped a comfortable distance away, did a facing movement so I wasn’t staring at him and went back to parade rest.

After a couple rounds of this he asked what I was doing. I politely answered that I was waiting for him to be done so he could talk to me about the fuel can as he promised. I think he actually questioned my resolve at first. But after shadowing him for 20 minutes it started to bother him. And it might have been a little creepy.

Finally he grabbed me by the uniform and led me to the makeshift supply office. He called a Captain over and told the Captain to give me a fuel can. The Captain started to protest, but the Major silenced him before he could get two words out. Then the Major looked at me very seriously and said, “I don’t want to see you again.”

I smiled and thanked him and he stormed off. That was the last time I ever saw him. The Captain took me to the supply sergeant and said, “Give him whatever he wants.” The Sergeant tried to say that they didn’t have any extra fuel cans but the Captain gave him one of those, “We have no choice” shrugs and walked away.

The Sergeant gave me a fuel and water can and said, “I don’t know how you got these.” It was better that he didn’t ask. Since I had free reign, that seemed like a good time to round out any last minute equipment shortages. When I walked back into the tent, our Lt practically ran the other way. He really, really didn’t want to know how I made that happen.

This was pretty much how things went for my Army career. I always made friends outside the unit and became an asset when we needed stuff. At one point an officer didn’t like the “If you ask you lose all deniability” line. I knew that he really needed it so it got changed to “It fell off a truck.” In Afghanistan I was actually ordered by a Captain in my chain of command to no longer follow trucks. Literally every vehicle on base was a truck (except the helicopters) so there was no way to do anything where I would not be behind a truck. He later rescinded the order so that I could go about my regular duties like running missions six days a week.

One evening I walked into the tent and asked a guy,” who’s the man?” He said he was. I agreed and walked away. I asked the next guy the same question. Of course he said he was, and of course I agreed and moved on. The third guy said, “You are.” I agreed with him and handed him extra pistol magazines, something we were in vast shortage of. Suddenly people wanted to change their answers.

I didn’t always use the Spec-4 mafia to get much needed gear. At times it was used for my own amusement or to work on projects that kept me sane. I was very close to actually having a pool in Kandahar when I assigned to another camp.

My time of creative acquisition sadly had to end when I got promoted. You can’t be part of the Spec-4 Mafia as a Sergeant. It just doesn’t work that way. Suddenly you go from “hook a brother up” to pulling rank. I tried to teach my guys, but none really had the knack. Those skills did come in handy as a civilian in a war zone. But I didn’t just take care of me and my guys; we helped support donations to a local orphanage.

As a civilian, the skills of creative acquisition translate over. Every job still has supply and logistical issues. There is always communication with other departments or organizations and having someone skilled in bridging those gaps comes in handy. Now, I don’t say that things fell off a truck or tell the person in charge that they need deniability. Now I say, “People like to give me things.” Which, in the end is more accurate.

This entry was posted in Commentary, So There I Was and tagged 25th Infantry Division, Army, Experiences, Fort Polk, JRTC, Management, POG, PSYOP, Rank, Sergeant, So There I Was, Spec-4 Mafia, Specialist, Vets. Bookmark the permalink.

9 Responses to The Spec-4 Mafia, If You Ask You Lose All Deniability