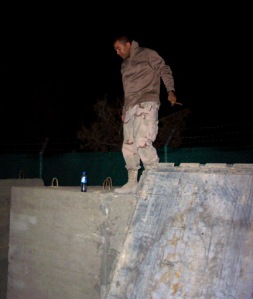 The perfect storm of events had a soldier up on a bunker in Afghanistan, in the middle of the night, drinking and smoking a cigar.

It of course started with seeing the movie The Last Boy Scout. As anyone familiar with the movie can attest, Bruce Willis keeps saying that if he gets out of this he is going to dance a jig. When things were stupid in Afghanistan, and they were often stupid, I would say to my friends, “When I get out of the Army I am going to dance a jig.”

That was the inspiration for the action, but the cigars came a different route. A route that has a story that must be told. Cigars are not difficult to come by in Afghanistan, especially on a military base, but I did not purchase them there.

I have the best friends. Not just the ones I served with, but I have a great support system back home. They send the best care packages. Kelly was an especially generous friend. Her name was spoken fondly among friends in Afghanistan. But for this package, it is another friend that was both a good friend and a Blue Falcon. An unintentional Blue Falcon, but a Blue Falcon none the less.

I received his care package when I was out in the middle of nowhere growing a beard. He sent me a nice selection of cigars. Even better, he sent them in a travel humidor. He was very thoughtful to add distilled water and a little dropper to fill the disk that would keep the cigars fresh. There were a few other items, like a container of lemonade powder that I believed to be thoughtful because we get tired of drinking water all the time.

I didn’t think much about it all until after I packed it all up to go to Bagram Airfield. At BAF as I was assigned the graveyard gate shift on our compound because the unit I was attached to was messing with me. I knew I was under the microscope so I tried to keep a low profile. The only people coming in and out were the KBR guys coming to drain the port-o-potties so it was easy duty. (see what I did there?) So I spent most of the time burning outdated PSYOP product. It was boring but an old friend Jimmy would hang out and keep me company. Jimmy was former Infantry like me and we reclassed to PSYOP together. But that is a story for another day. 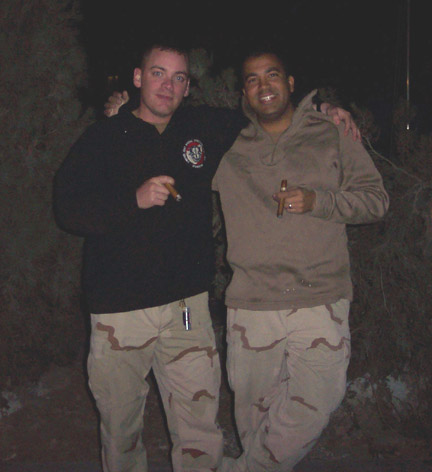 It is times like this you know who your friends are, and Jimmy was a good friend.

Side note: if you want to punish someone, don’t put them on duty where they never have to see or deal with you. I would do the graveyard shift, then crash out for most of the day. When I would get up, I could hang out by myself until Jimmy got off duty, then watch movies until my shift started.

One day, I decided to stop living out of foot lockers so I unpacked them. As I was putting the cigar package stuff on a shelf I saw the second water bottle. On one bottle was written that it was water for the humidor. The second bottle had, “Absolutely not for humidor” on it. I thought that was odd wording. It could have just said “not” but the “absolutely” was curious. I opened it to discover it was vodka. The lemonade made more sense all of a sudden.

Had it been a week earlier, it would have been fine. I would have disposed of it with some other bearded fellows. But I was in the land of the clean shaven and this would spell trouble for me. Suddenly, the hook up became a blue falcon move. Next time I saw him I pulled Jimmy aside and told him, “We need to get rid of this tonight.”

Of course, I had also been telling him that when I got out of the Army I would dance a jig. As it would just so happen, that was my last day in the Army. My contract was up. I had been stop-lossed for the rest of the deployment, but it was still my official last day and it was cause for celebration.

After everyone had racked out, Jimmy and I mixed the vodka into bottles of lemonade and smoked those cigars. True to my word, I danced a jig. And not just anywhere, but on top of a bunker in full sight of a headquarters building where the bigwigs slept. After all, what could they do to me? Stamp my meal card “no desserts,” bend my dogtags and send me to Afghanistan? We were about to go home so screw it.

While there wasn’t enough for us to get drunk on, it was still a clear violation of General Order #1 and that felt good in itself. We tossed the empty bottles in the fire and after all the evidence was destroyed, the guys racked out and I finished another long shift in the night.

Why is anyone ever anywhere doing anything? Everybody has to be somewhere doing something and how many people can say they were dancing on bunker in Afghanistan while drinking and smoking a cigar? Now that I think about it, odds are pretty good that at least one other person has done exactly that.

This entry was posted in So There I Was and tagged Afghanistan, Army, BAF, Bagram, Blue Falcon, Brothers in Arms, Bunker, Cigar, Combat Zone, dogtag chronicles, Experiences, funny, General Order #1, good times, Military, Military friends, My Deployment, PSYOP, PSYOP reclass, So There I Was, Veterans, Vodka. Bookmark the permalink.