A Boy Lands on Normandy and Becomes a Man

Warren Eddy was the youngest of six children who were raised in a rural part of northern Minnesota. Shortly after he graduated from high school, his family moved to California. Eventually, Eddy moved to Washington, D. C. to live with a sister. Soon after his arrival in 1940, Eddy joined the Coastal Defense National Guard Unit, which had its roots in the Civil War. Eddy was assigned to an automatic weapons battalion. Once Pearl Harbor had been attacked, the status of the National Guard Regiment in which he was serving was changed to permanent active duty.

His Regiment trained at Fort Bliss, Texas, and when Pearl Harbor was attacked the Regiment of over 1800 men and officers boarded a train, headed for the Pacific Northwest. Due to a lack of space at Army bases, the Regiment was housed on the fairgrounds at Puyallup. Even though their weapons and equipment had not yet arrived, the Regiment trained, nevertheless. The Regiment’s anti-aircraft defense assignments involved the protection of strategic locations such as the McChord Air Force Base, Naval Base at Bremerton and the Boeing Manufacturing Company at Paine Field.

While serving with the Regiment, Eddy was selected to attend Officer Candidate School at a base in North Carolina. He was commissioned a Second Lieutenant in November of 1942. He was assigned to an automatic weapons battalion that was composed of 40 MM Bofors, fast firing anti-aircraft guns, and half-tracks with four .50 caliber machine guns. In addition to the half-tracks, the battalion, which was composed of 800 + men and officers, had numerous trucks and jeeps and was a completely mobile unit.

Following 3rd Army maneuvers in Louisiana, Eddy’s battalion boarded ships on the east coast for the two week cruise to England. Once they landed in Liverpool, the battalion was sent to Aintree Racecourse where they lived and trained. Eddy’s battalion was attached to the 29th Infantry Division, and once their weapons and vehicles arrived, they trained on the Moors in South Devon, practicing beach landings.

As D-Day approached, all Allied forces were placed at a heightened level of readiness. On D-Day -1, Eddy’s battalion made their way to the docks. His battalion was back loaded onto LST’s; Omaha Beach was their destination. On the morning of June 6, 1944, the armada of all sorts of naval vessels departed the shores of England. The battalion would wait on the LST’s for three days until a road leading from the beach had been cleared. It was Eddy’s duty to read letters from Gen. Dwight Eisenhower, Supreme Commander of the Allied Expeditionary Force and British General Montgomery to the men on his LST. The same letters were read to all forces participating in Operation Overlord, the invasion of Normandy. 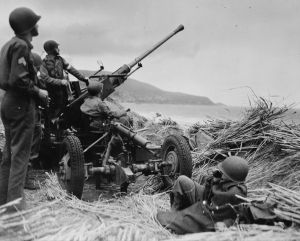 A 40mm Bofors like the ones Eddy’s unit unsed in WWII.

On D-Day + 4, Eddy’s automatic weapons battalion dry-landed on the beaches of Normandy, and immediately made their way inland. On the way, his battalion suffered casualties from sniper fire and land mines. When his unit’s Executive Officer was killed, Eddy was given a battlefield promotion to First Lieutenant and became second in command of his unit. While their mission was that of air defense, one of the commanding generals on the scene took advantage of the battalion’s fast firing guns to provide ground support for the infantry troops who were engaging the enemy in the infamous hedgerows of Normandy. During the day, Eddy’s unit moved from field to field, clearing hedgerows and battling the Germans for control of the inland. At night, they slept in foxholes.

On one occasion, Eddy was ordered to reconnoiter a road in an effort to assess the enemy’s location and strength. He and two other troops proceeded down a road into a German controlled area when they were subjected to heavy mortar and machine gun fire. They fought their way out of the ambush, safely returned to their unit, and provided information regarding the enemy presence. For his action, Eddy was awarded a Bronze Star with a “V” device for Valor. Approximately six weeks after landing in Normandy, the Allied forces were able to seize total control of Normandy and begin its break out. In August of 1944, Eddy participated in the liberation of Paris, and the 60 vehicles in his battalion transported U.S. troops through the streets of Paris to the wild cheering of the newly liberated Parisians.

Eddy’s battalion was ordered to Holland for air defense duty, which was short lived when they were then ordered to support Allied efforts during the Battle of the Bulge. After reaching the Elbe River in German, all units were ordered to stop and let the Russians meet them there. While waiting, they were informed about a German POW camp filled with Americans. Control of the camp had been seized by the Russians, and Eddy’s unit organized a convoy of 60 vehicles to free the prisoners. With the assistance of an Army Lt. Col. from Headquarters, who had maps of the area, the battalion successfully rescued the prisoners.

After the war ended, Eddy performed occupation duty for six small villages near Frankfurt. When he returned home, he was discharged from the Army, but remained in the Army Reserve from which he retired as a Major.

Eddy received a B.S. degree from Michigan State University and then moved to California where he became an executive for a gas company. He attended the University of Southern California and earned a Master’s degree. For several years, he taught management courses at the graduate level. It was while he was living in California that he met his wife Sandra. They have been married for over 50 years and reside, now, in Edmonds. Eddy and Sandra have two children, Rudi and Carla, six grandchildren and two great grandchildren. He is the Past Commander of American Legion Post # 43 in Hollywood, California and a Life Member of VFW Post #8870 in Edmonds.