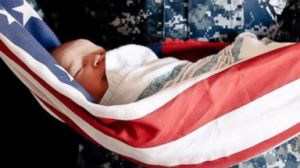 Because of this image Vanessa Hicks, a Navy vet, received threats.

The American flag has been in the news a lot lately. Last month, a photographer took a picture of a baby being cradled in an American flag being held by a person in a Navy uniform and caused quite a stir, especially among the veteran community. Most recently, a video of Michele Manhart being arrested after trying to take a flag that was being walked on went viral and sparked a number of conversations about the First Amendment, the meaning of the flag and what it means to be patriotic. 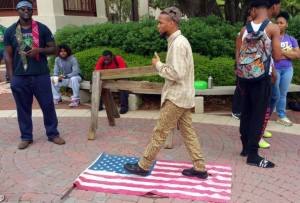 According to flag code she was right to take the flag and properly dispose of it as she said was her intentions in the video. The actions of the protesters were actually illegal and just as an unfit parent can have a child taken away, so can the legal owner of a flag have it taken away for purposefully desecrating it. Since the focus of the video and all the media attention has been on Manhart we don’t know what the purpose of walking on the flag was but it must have been some form of protest for some social justice issue happening in the United States.

Ultimately, no matter what anyone thinks, the flag is more than just a piece of cloth. It represents something but it also doesn’t have a singular meaning for everyone. Even for me, as a veteran, the meaning of the flag is not the same as all other vets and service members. There are as many different meanings for the flag as there are strands and stitches on the flag flying outside my office window. It is the plural view that make up the fabric of our nation that makes this country great.

When the flag means the most.

For me, the flag represents the freedoms I enjoy as an American and defended as a soldier and it will be the final honor bestowed on me as they put me in the ground. By contrast, flags are burned in other countries to represent their hatred for the U.S. and what they perceive as American imperialism or our government’s intervention in sovereign nations. Even within our own borders some people think the flag represents institutionalized racism or oppression of some sort. At University of California Irvine students voted to remove the flag from a common area because they felt the lounge is supposed to be “culturally inclusive” and while hanging the flag might be seen as free speech, “freedom of speech in a space that aims to be as inclusive as possible can be interpreted as hate speech.” To me, this is a typical college student thing but it ignited a firestorm online and a lot of back and forth on the campus including a legislator trying to make a bill outlawing banning flags on college campuses.

While the flag represents many things, it is not a magical piece of cloth that oppresses all under it or protects us from evil. I was on an extended mission in the middle of nowhere Afghanistan and while I did not have a flagpole nearby I never questioned my loyalty or where I came from. Some college kids rebel, it is what they do. They did something that has no impact on the world as a whole and got a lot of attention doing it. And yet, we remain strong. ISIS did not start beheading people in Times Square because of UC Irvine.

The stars are wrong but few people noticed when it was posted on tumblr. Used as promotion by clothing line.

The flag and baby image was accused of being a violation of flag code. Which it was not. However, an improperly displayed flag is. The flag being used for promotional purposes is a violation of flag code. Yet, no one seems to question those. We overlook when a flag is used improperly to support the military and that is when special care should be made to properly display it. Google “unfuck your flag” and you will find posts on the DTC Tumblr telling people they blogged an improper flag. Apparently that is going to be my Tumblr legacy.

As a veteran, I take the flag seriously, and I am sure Vanessa Hicks, the photographer behind the baby flag picture, does too. She is, after all, a Navy veteran. She has earned her First Amendment right, it wasn’t given to her like everyone else while they are within our borders. She paid her dues and I respect her for that. 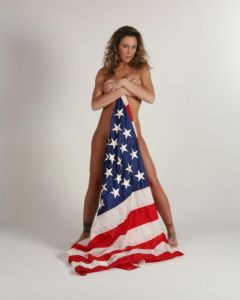 Long before she picked up a flag for being on the ground, Manhart posed with a flag touching the ground.

Manhart also served. She spent 13 years in the Air Force and values the flag. Or at least that is what she says now. If a picture is worth 1,000 words, flash back, pun intended, a few years and Manhart is holding a flag that is clearly touching the ground. At the time, for her the flag was representing her service and her commitment to her country but it was also being used as for promotional purposes since the photo shoot was for PETA and the campaign to go naked rather than wear fur. The case can be made for at least two Flag Code violations but she is unapologetic about it. I will be the first to concede that there is a large difference between a draped flag touching the ground and deliberately walking on it but they both have one thing in common.

The second the flag is used improperly, whether in accidental flag code violation or purposeful protest, the flag no longer has one of thousands of meanings. At that second it represents the individual’s freedom of speech and expression. Holding a flag to covers tits or lighting it on fire are both acts protected by the First Amendment.

Violation of flag code? You decide.

An argument could be made that Hicks’ use of the flag might violate the spirit, but not the letter of the law of Flag Code while walking on it is a clear violation. In addition, her artistic use of the flag is a representation of what all warriors feel. The flag protects and defends the ones we love. It is a better meaning than a flag made of bullets or wrenches. I will say that her one time use of the flag was more patriotic than the hateful responses she received. Freedom means being able to say what you want, even if it is not popular. The greatest thing about this country is that speech and expression is protected. Threats are not protected speech, they are a violation of the law.

As a veteran I believe that everyone should have the freedom to say or do what they want as long as it isn’t a violation of the law and doesn’t hurt anyone. Trying to tell someone, especially a veteran, how to express him or herself is actually un-American. It violates the First Amendment and in the case of some of the comments are a violation of law. There is something seriously wrong when a violation of flag code is reblogged hundreds of thousands of times and an artistic use of the flag that is actually military supportive is considered an offense beyond measure. I didn’t hear a single veteran speak up when Gabby Douglas’ dad wrote all over an American flag at the 2012 Olympics.

Air Force Staff Sergeant Douglas should have known that this was defacing a flag but no one during the Olympics seemed to mind.

I would also like to point out the hypocrisy of a group or website that prides itself on being offensive being butthurt over an image of a baby and a flag. Harden the fuck up princess, there are real things going on in the world. I do agree with Manhart’s intent, but her past flag violations hurt her credibility as a spokeswoman for flag respect.

In the end, while I do not agree with many uses of the flag, I will defend someone’s right to express themselves freely. What the flag represents is as individual as the person, until it is misused, then it only represents the First Amendment and the freedom of expression they have in this country that is unparalleled in the rest of the world. So stop disrespecting it unless your intent is to celebrate this great nation and the freedoms you enjoy.

Editor Note: We at DTC are fully aware of Michelle Manhart posing for Playboy and being discharged from the Air Force because of it but it is not relevant to the topic at hand. Her life choices are her own business and she has the freedom to legally do as she pleases so no need to comment about it.