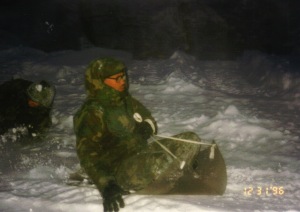 Not exactly the image of a trained killer that some civilians seem to think we are. This soldier spent more of the deployment playing in the snow than sighting down a rifle.

I started the Dogtag Chronicles because of experiences I had on campus at the University of Washington. Too many people seemed to think people in the military are a bunch of clone troopers waiting to be sent off to kill. In truth, the military is just a microcosm of the United States. There is a decent diversity in viewpoints but mostly there are a bunch of young men and women that act like young men and women and when they have too much time on their hands we act more like young people than killing machines. Here is one such story.

So there I was, in Bosnia, no shit. It was the winter of ’96 and we were a group of bored Infantrymen. We were part of the second rotation to deploy as part of the NATO force to enforce the Dayton Peace Accord and by that winter the country had settled into a routine. People liked the quiet of no more war and were benefiting from the reconstruction money flowing into the country.

Even one of the Intel kids got in on the sledding.

Mount Vis was more of a foothill but was a former Serbian position and since it was the highest piece of ground in the area there was a signal retrains station and the air defense radar site. For grunts there was nothing to do but a lot of guard duty. On the hill was about 40-50 POGs, mostly Intel wienies and the nasty girl radar guys. Mechanized Infantry platoons were rotating every three weeks to pull guard duty. But there is a reason why mortars are called (or call ourselves) the smart Infantry because once we got a hold of this sweet gig we never let it go.

It did not take long to realize how good of duty it was. Small hill, no extra duty or patrols and most importantly, away from the flagpole. The battalion command was only a few kilometers away in the valley at Camp Dobol, but they only made one trip up and that was at the end of the deployment. It was not long into our Mount Vis rotation that one of our NCOs pointed out that we would be better served staying on the hilltop and being able to provide final protective fire for the basecamp if it was ever attacked. The command agreed and left us up there so a three week rotation turned into a five month stay. Of course they quickly forgot about is and we never received updated weather data which would have a huge impact on mortar fire so the plan of hasty accurate fire to protect the firebase was just a concept as soon as the weather changed.

At first, it was sweet. They housed the enlisted guys in our own tent, no one bothered us. Then the monotony settled in. We only went down to the PX once a week or so and there wasn’t much to do. Our NCOs also saw a good thing and let us set our own guard schedule so there really wasn’t any adult supervision. If it wasn’t for running into them in the chowhall, we might not have seen some of them for the rest of the deployment.

When the snow hit and buried us in a foot of white stuff that didn’t go away, the crazy started to creep in. Fortunately, we had some level headed guys and there was some maturity in the section. If we would have all been teenagers I think there could have been a Lord of the Flies situation. It was during this deployment that I made two deployment rules.

First came the snowball fights. Although something that one-sided should not be called a fight. It started with a squad of Infantry making snowballs for 30 minutes and loading them on a stretcher. Then throwing them at the doors and roofs of the other platoons until they came out. Anyone that did was subject to a barrage of snowballs by teams using fire and maneuver. That cook that rushed out and was trying to make ammunition as he went never stood a chance.

On Mount Vis we were blowing off steam but the rule at Dobol was instant Article 15 for anyone caught making a snowball. So it felt like the Wild West up there. Then, while looking through a junk pile one of the guys slipped and busted his ass. Hidden under the snow was a piece of Plexiglas, most likely left over after building one of the bunkers, and we put it to good use. 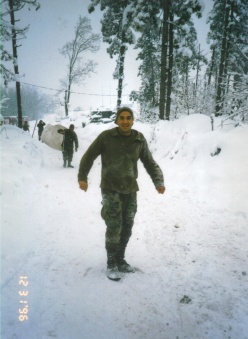 Returning to the top after a run.

The road from the top of hilltop to the gate was decently straight and it plateaued long before we hit the wire. Only two problems, there was no way to steer the makeshift toboggan and brakes was out of the question. Every run ended in a wipeout. It was one of the best experiences of the deployment.

Fortunately, this was a time before social media so our activities were not blasted all over the Internet. They did not go unnoticed. Some of the shenanigans were taped and compiled into a video that someone shared with a friend down the hill. I do not know how far it circulated, but when combined with the story the Avenger gunners that continued to rotate through it was enough to develop a reputation that we were a little crazy. Camp Visitors were told by the hill mayor to stay away from “his grunts” which was enough to discourage casual onlookers and the signs we put on our tent didn’t help.

Our Camp Dobol Institute for the Clinically Insane sign was an effective deterrent but I preferred the police sign. The person in charge of a camp was usually an officer and called the mayor with his or her senior NOC being the sheriff. Our mayor was a retiring Master Sergeant and since we were the hill security, we called ourselves the Sheriff’s Department. I liked that sign better but it did not assure anyone of our mental stability.

In the end we all survived despite Red Rob locking and loading in the tent and threatening to shoot Lance and were able to reintegrate into the unit when we finally came off the hill. After being around other people and access to other outlets we were all able to decompress and return to as close to normal as we were before. Overall the deployment turned out not too bad and was a good baby step to learning coping mechanisms before the real deployments started. I think people who went in without those lessons had a harder time being away and dealing with the boredom than those of us with some experience.

Then again, now troops have Xbox and the Internet so I think they might have it better. But a day of sledding before we totally trashed our makeshift toboggan was a great time and a good memory.