Sometimes the military does some good 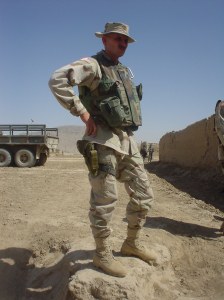 Maj Parker, a good guy despite being a field grade officer.

Every veteran I know has stories about discussions with young, idealistic civilians that didn’t go well. At some point we have all been lectured about all the babies that we are killing, all the countries we are invading and how we, specifically, are why the rest of the world hates us. On the flip side of that is the war junkie who wants to talk about all the guns we shoot and things we have blown up. If you ask either group about the good we have done overseas you will get a blank stare.

I guess we can blame the media and video games. Not to attack either industry, but stories of digging a well just aren’t very sexy on the front page, especially when a Kardashian might be showing side boob out there somewhere. As for video games, there is no Call of Duty: Civil Affairs but maybe there should be. So while it isn’t getting a lot of attention, there is a lot of good being done by the military in the world, here is some of what just one team did.

So there I was, in Kandahar…no shit. We were breaking the wire six days a week conducting village assessments. Our team was made up of a mix of Psychological Operations (PSYOP) and Civil Affairs (CA) and would visit three villages a day. The CA side, led by Major Parker (Now a retired Lieutenant Colonel), would ask questions to see what their reconstruction needs were while one PSYOP soldier would ask questions about how they receive messages and the other would talk to locals about the PSYOP product we were handing out. This was 2004 when the Afghan government was trying to stand up the Afghan National Army (ANA) and for a while they joined us as our security so an ANA officer could talk to the villagers about joining up. 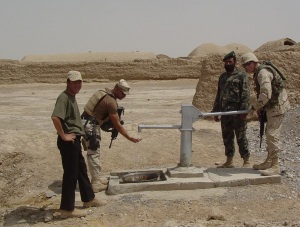 Testing one of the new CA provided wells.

While I only did that for about six months of my tour it was the time where I had the most positive interaction with the locals. Sometimes I would sit outside the meeting with an interpreter and Sadiq, our guide, and talk to the locals. From time to time we would sit in a field with a farmer, cut open some melons and have some really interesting conversations. That was the best way to better understand the the people, country and culture.

The CA troops I worked with were very dedicated. The “Hearts and Minds” campaign always came off as disingenuous. It is like the waitress flirting with you to get a better tip. What that team was doing is more like a person bringing you soup when you are sick. One is being nice to get something and the other is being nice for the sake of being nice. The mood of the team wasn’t to manipulate the locals into liking us, but to help with reconstruction efforts. People who sincerely wanted to help. It also made us a lot of friends. Who would you trust more, the Taliban guy holding a gun to your head or the one that is making your life better and asking for nothing in return? That is why CA efforts are such a threat to the enemy.

It is also kind of difficult to hate a person that comes to you with respect, gives you access to more resources and leaves without compensation. It was a very rewarding time for me. Being a former grunt, it was good to actually mingle with the locals rather than look at the country from behind a gunsight.

We also got to see a lot of good being done. Parker had a formula for how much aid a village received. Simply put, find out how many people were in a village, find out how many wells they had, if they didn’t fit the ratio, have more wells dug. We visited a couple hundred villages in all and we would visit each one about every 40 days or so. That gave us the opportunity to check on the progress of the well or see if the water was good. Unfortunately, it was not a fast process and in some areas they found salty water  at one depth so they had to dig deeper. While not instant gratification, it did feel good to get out, meet the people of Afghanistan and help them in some ways.

Not everyone had those opportunities. Major Wilson, a supply officer with the 25th ID, and his people had never been outside the wire and they didn’t want to go home without feeling like they had done some good. They wanted to help refurbish a school but didn’t know where to go. As the resident expert on the local villages Parker was consulted on which village to help. He selected New Salo Kalay, a village that was supporting of the coalition and progressive in that they insisted their girls go to school. 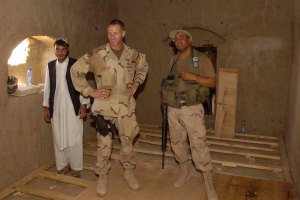 Maj. Wilson inspecting the work he and his troops did. It was so hot gear had to be dropped.

Normally we would visit three villages a day, not stay too long and vary our routes in and out to minimize the risk of enemy contact. Parker was tactical savvy and wanted to keep us safe. He was also a good leader in that he tried to make things suck less for his troops. We would break the wire early and be back before the hottest part of the day. Something I still appreciate him for.

Unfortunately, this was not going to be one of those days. We spent eight hours in that village, during the hottest part of the day. When we got back it was reported the temp topped 140 degrees that day. It was hot and miserable but everyone hung in there. At the end of the day they had built a wooden floor for the school so the students wouldn’t have to sit in the dirt anymore. 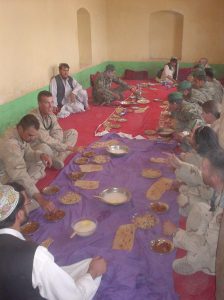 Pashtun hospitality. For many it was their first time eating local food.

Overall it was a good experience for the soldiers. They got to do some good and the village hosted them for lunch. If you have never experienced Pashtun hospitality you are missing out. They fed the entire platoon so they wouldn’t have to eat MREs. It was good for the soldiers who got to get outside the wire, eat with the locals and do some good. They felt productive and like their deployment was about more than handing gear to soldiers.

I wonder how many of those people who lecture vets would feel if they saw what happened that day. Would it change their minds about soldiers? Knowing that not only had American soldiers volunteered to help a village, but that is one that we had already installed wells to give clean drinking water to the village. Every time we visited we also would drop off humanitarian assistance, school supplies, radios and even stuffed animals. 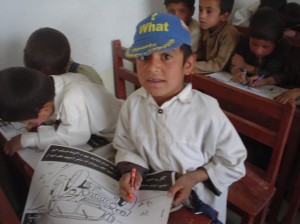 A kid coloring a PSYOP product telling them to stay away from military convoys.

Few Afghans will remember our names but many will remember our actions. Men like Parker brought clean water to villages around Kandahar. He helped so much and did it without asking for anything in return. Somewhere in Afghanistan there are people that remembered what Americans did for them. They remembered that we endured the heat to help rebuild their school. There are men in Afghanistan that are now giving the stuffed animal I handed them, maybe the only one they have ever had, to their own kid.

We only focus on the negative, but there is a lot of good being done by the military. It isn’t sexy or cool, Michael Bay isn’t lining up to make a movie about it but that doesn’t take away the good that is happening. Hopefully, more people will share those stories so others will know it isn’t an isolated incident.

This entry was posted in Commentary, Kicking Some Knowledge, So There I Was and tagged Afghan, Afghanistan, Army, Civilian, Combat Zone, dogtag chronicles, Enlisted, Grunt, Hearts and Minds, Infantry, Kandahar, Life Skills, Military, Mission, My Deployment, OEF, Operation Enduring Freedom, PSYOP, reconstruction, So There I Was, Taliban, Veterans, Village. Bookmark the permalink.