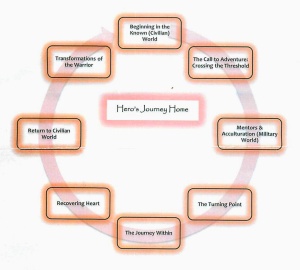 The progression of the hero’s journey in movies and myths. Hopefully, for the vet it ends at home.

I am participating in a project with the Seattle Veteran’s Administration (VA) called the Hero’s Journey Home. While I will keep some of it private, I thought since I have this forum I could share some insights that some fellow vets might glean something useful from.

The theory is based on Joseph Campbell’s work on the hero’s journey. The reader’s digest version is that all stories from Homer’s Odyssey to Star Wars and the Matrix all share a similar path. The hero starts out in the known world, feels the call to adventure, enters the unknown, meets mentors, is tested, faces darkness, receives some form of reward and starts the return journey home.

The working theory that we have been working with is that this is a cycle that normal people repeat in their lives. Home is familiar then you go to school which is unknown. Teachers are mentors, get the diploma and return to life after high school. College or the job world is another move from the known to the unknown. These cycles in a sense repeat. For the purpose of the group, we are saying that a military career is a more dramatic cycle than the ones civilians experience and that makes the return to the known, or the journey home, more difficult than the average civilian job change.

There are some hiccups in translation. Hero is a loaded word to veterans. Many have heard the saying “I’m not a hero but I have served with some.” I think most I know feel this way. In this context it doesn’t mean someone that committed heroic acts but the hero of the story. I think a more accurate term might be the path of the protagonist but it doesn’t roll off the tongue as well.

There is one little issue I have had with the theory is the lack of completion in the examples. Odysseus does indeed return home, only to leave shortly after. But in the other examples, Luke Skywalker and Neo don’t return home. It makes the incomplete examples to emulate. Neo doesn’t get plugged back into the Matrix, he stays in the “real world” which I think is something that veterans can relate to.

Some of us truly leave the civilian world behind in our time in the military. Travel around the world, see and do things that no one back home can relate to makes it difficult to “plug” back into life back home. Life in a small town isn’t the “real” world. It is a nice little pocket of life that changes little.

Trying to explain to someone back home about life overseas is like Neo trying to explain to someone in the matrix what Zion is like. Not just how they live but the dichotomy of thinking the “machines” are evil but using machines to combat the enemy that is itself a machine. If the Matrix is bad, why plug back into it? But how can it be bad if people don’t know any different? The discussions would be maddening. Just as they are with veterans and sheltered civilians. (I make the distinction because there are some who have been outside their safe little bubble that have a broader understanding of the world at large.)

These stories, while a good representation of the journey of the hero, none of them cover the hero’s journey home. However, for the first week, being able to step back and see how these patterns repeat and being able to put the military experience into a context that everyone can understand is a good starting point.

Unfortunately, they are just stories and there are some aspects that do not translate into real life. In the movie of our military service it would end with a soldier in dress uniform dropping a duffel bag on his mom’s porch, DD214 in hand, and walk through the door before the fade to black. If it was a movie about the deployment, the parting shot would be the trooper stepping of the plane. For those of us who have returned home we know it isn’t that easy. 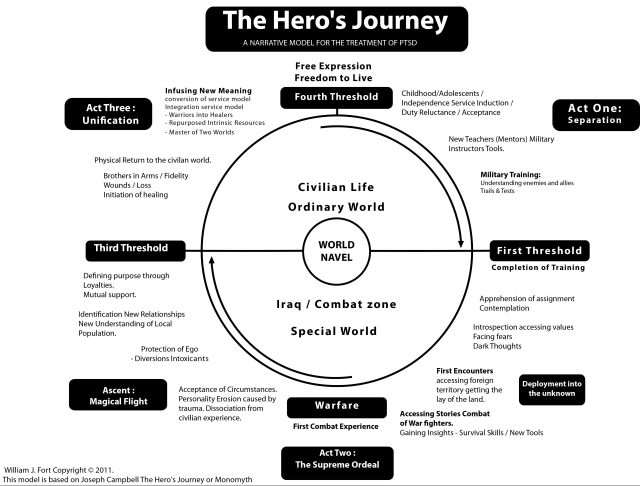 Another look at the hero’s journey. I think this is more of where the conversations will be going.

He took a run down the trench of the Death Star, dropped two photon torpedoes down the exhaust shaft without a targeting computer. Somehow shooting womp rats in Beggars Canyon doesn’t hold the same appeal. But that is the most exciting things those other kids had done. Just looking at them he sees his own youth and how cocky he had been before the mission. His first mission fighting a real enemy. Sure, it worked out for him, but how many died trying to complete the mission? Whole squadrons were blown away in hopes that one ship would complete the mission. Hard to brag about your exploits under those circumstances.

If Luke was in a bar near Tatoonie University you know there would be some undergrad that would love to tell Luke how what he did was wrong. After all he senselessly murdered 1.7 million people and 400,000 droids. He is not a military leader, in fact, Luke was just another farm boy from a dirt planet a week ago. What made him qualified to decide those people needed to die? The word of the crazy old hermit and an imperial prisoner that claimed to be a princess? It would not be long before Luke left that place and never returned.

How many vets have been in a bar and been held accountable for whatever decisions the government has made? Some vets keep a low profile when using their GI Bill to avoid the faux intellectuals on any given college campus. Troops don’t make policy, but we are the instruments of the government’s policy yet somehow we have to answer for it, even decisions made by two administrations ago.

Unlike Luke, many vets want to return home. If not the place they grew up, at least the country the defended. That journey home can be difficult. Hopefully, by chronicling my time with this project hopefully some vets will find something useful from it.