Boba Fett was a POG

File this under “things troops talk about on guard duty” but with the launch of The Mandalorian on Disney+ this is a timely topic to write about. I understand that some might have strong feelings about Boba Fett being a POG, but if you objectively consider my reasoning, you will agree with me.

Why we think he is cool

There is an overwhelming belief that Boba Fett is awesome, and the reason is simple; we, as kids, made him awesome. He was the only Star Wars action figure with a jet pack! I had the Boba Fett action figure as a kid, I saw Empire Strikes Back in the theater and the mysterious bounty hunter had all kind of bad ass imaginary adventures with my other action figures. He had rockets, he could fly, how could he not be the mot awesome character that wasn’t Jedi trained?

His mystique only added to his inherent coolness. We filled in the blanks for all the information we lacked. He was awesome because we all agreed that he was awesome, but that in itself does not make one awesome. Strong, silent type with a jet pack and missiles, he must be some kind of former Special Forces Delta Ranger SEAL SWAT Commando right? The idea that he was awesome became part of our culture that no one really questioned. We all just knew he was bad ass, that is all there was to it.

Looking back, there really is no evidence to support the idea that he is a former operator, in fact, quite the opposite.

Why he is a POG

For the uninitiated, POG stands for Person Other than Grunt. Infantry are grunts, the stereotypical hard charging, life taker and heart breaker kicking down doors and taking down bad guys is a grunt, cooks, mechanics, paper pushers and the like are POGs. In popular culture, Echo company from Band of Brothers; grunts, the guys maintaining the planes in England, POGs. Spartans; grunts, the guys discussing the actions of the 300 were POGs.

Disney is the man reason why Boba Fett is a POG. When they bought Star Wars they made all previous material except the movies no longer canon. As far as the Star Wars universe is concerned, the only things that happened were the movies and maybe the Clone Wars cartoons. It is that limited evidence that points to Boba Fett being a POG.

He is one of many bounty hunters hired to find the rebel heroes, and while he figures out that Han and Leia are heading to Cloud City what does he do? Does he stealth in and bag and zip tie them? Nope, he calls Vader to set up a trap at dinner. Not very operator of him. That’s it, his big capture is done by someone else.

I’m pretty sure it went like this: “So there I was, at Cloud City, no shit. I tell Vader, I don’t care what you do with blondie, I’m taking Han Solo and that’s that. Unless you want to start something.”

The next we see him in in Jabba’s palace in Return of the Jedi. The lag between the two movies is about a year. So he isn’t out bounty hunting around the galaxy. He is hanging out with Jabba. Not exactly the life of a galactic bad ass. I’m sure he told Jabba that he threatened Vader to give him Solo or some nonsense. He is that guy at the VFW bar telling the same tall tales to anyone within earshot. So more freeloader than operator.

She’s a slave girl Boba, she has to be nice to you. He’s like the private at the strip club that thinks he has game because strippers keep talking to him.

When another bounty hunter, Leia in disguise, shows up and reveals a thermal detonator, he draws down, but any sharpshooter would have dropped her with a well-placed shot between the eyes. Instead, Boba Fett is freaking out under his mask wishing he had worn his brown pants.

Next we see him, most likely drunk, on Jabba’s skiff when a fight breaks out. He clumsily flies over gets into close quarter battle with a Jedi armed with a lightsaber. Something he should know not to do from personal experience. He is unceremoniously knocked into the Sarlacc pit by a blind Han Solo. That’s it. No sniping from the rail 100 meters away, no rocket, no vibroblade between Han’s ribs. Nope, his POG ass get accidentally hit with a rod and over the rail he goes. 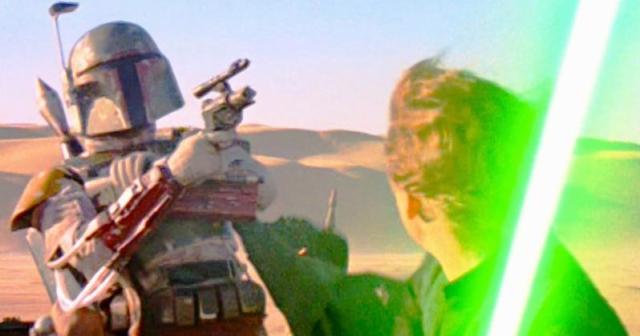 Couldn’t think of a good reason not to get into close battle with a Jedi? No, nothing comes to mind? Maybe if you didn’t believe your own hype you would have shot Luke from a distance.

“But Mandalorians are bad ass hunters,” I imagine you saying. They might be, that isn’t canon, but maybe they are with the new streaming show. But Boba Fett isn’t a Mandalorian, he is the clone of a Mandalorian. Don’t get me wrong, if you are going to make an army out of any genetic material, Maoris are a solid choice. But Boba Fett wasn’t raised on Mandalore, he was orphaned on Geonosis when his “dad” decided to go toe to toe with one of the strongest Jedis in the galaxy. I guess forgetting you have a fucking rocket on your back runs in the family.

Since Mandalor Child Protective Services didn’t come get him and put him in foster care, he wasn’t raised with or by other Mandalorians. He had his dad’s armor and ship, which is what he uses later as a bounty hunter. So, if anything, he is less of a POG and more of a case of stolen valor. If anything on the armor represents anything in Mandalorian culture, he is banking on his dad’s exploits. Just because your dad was a bad ass operator doesn’t make you Specials Forces once removed.

As a veteran, this is more than a fun thought exercise. I have met Boba Fetts in my life before. A prime example is a guy named Troy. He would introduce himself as a “Marine machine gunner.” Like Boba Fett, he wanted people to fill in the gaps and think that he was a grunt, kicking down doors in downtown Baghdad as part of an Infantry platoon.

The reality is that every unit down to the platoon level, even POGs, have machine gunners. During the convoy, someone has to ride up top and pull security. Usually the lowest rank or the dumbest guy. The truth was, Troy was a jet mechanic. They don’t put F18 fighter planes out on a firebase in the middle of nowhere, they are either on ships in the gulf or on the huge airbases. Troy wasn’t kicking down doors, he was turning wrenches. Any operations he claimed he was on was because he was a grease monkey for the planes providing close air support for actual ground pounders for that operation. 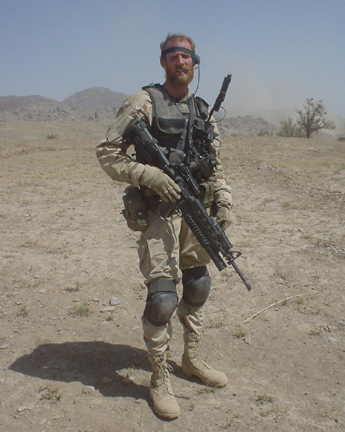 Grease monkey Troy thinks this Special Operations (but not Special Forces) soldiers isn’t a “real vet” compared to him. That is more delusional than normal trash talking.

Of course, Troy believed his own hype. Claiming that women and anyone that didn’t deploy in support of Operation Iraqi Freedom weren’t “real vets.” Once, a Vietnam vet with a Specter gunship patch on his jacket came around, Troy made a show to shake his hand and thank him because they really “saved our ass over there.” Yeah Troy, when did insurgents swim to the ship or overrun the airfield, past many levels of security to get to the point where the only thing that could help you was gunships providing close air support?

What can civilians do with this information? When you find a blowhards in Gruntstyle shirts trying to tell you how bad as they were, politely smile and nod. Honestly, they most likely need the attention. Consider it your good deed for the day. If you want to hear stories from real troops, look for the vet that tells stories that buildup the people he or she served with, not themselves, or the guys talking among themselves at a table with a full beer in front of an empty chair.

Full Disclosure: I haven’t seen any of the episodes of The Mandalorian.

UPDATE follow up piece: Boba Fett is Still a POG