Political Correctness Does Not Belong on the Frontline

Most people have taken the fact she is holding a gun out of the discussion when it is the only thing that makes her a target. Contrary to early reporting, the picture with the verse of the Quran is behind her and not part of the cutout.

There is a vicious, misogynistic attack against Muslim women involving the U.S. Navy and it needs to stop. Women who are almost universally believed to be oppressed by their culture are being attacked in a way they never thought possible. Currently, Political Correctness (PC) is trying to limit and marginalize women of the Islamic faith.

The U.S. Navy, which has been making strides towards equality by being the first to place women in jobs previously only open to men has backed down due to political pressure. This move not only continues the subtle oppression of Muslim women, but might cost lives in the future.

The PC police are criticizing the use a woman wearing a hijab, the head scarf worn by Muslim women to cover the hair, as a target in a kill house. If that were the case, I would understand. The term “kill house” sounds bad. And setting up targets of Muslim women for Navy SEALs to shoot at seems wrong, but before we take that leap, allow me a moment to talk you off the ledge.

First we must discuss terminology. The military always has very dry, academic names for everything. Then a more accurate term, shorter term is given by the people that actually use it. So the area that is used as a “life fire, target simulation engagement training area” is called “kill house” by the guys who use it. Basically, it is a series of rooms with thick enough walls to stop bullets where combat troops can practice tactics using life rounds. All elite forces use them, even you local SWAT team. Because they are expensive, not to mention dangerous, most soldiers, sailor, Marines will never train in one.

In a “kill house” there are a number of “targets” placed randomly in different rooms. The shooter (appropriately named because they have guns and shoot stuff) move through the building clearing each room. Some targets are placed in such a way that it is not immediately visible what is on the front of them. The purpose is to engage the “threat” targets and not shoot the “friendly” ones. A threat is anyone with a weapon, a friendly is anyone unarmed.

Not a very realistic training unless we start getting attacked by grey gym teachers from the 1950s.

If you ever watched an old cop show or ever been to a shooting range you have seen the pictures of the shady guy with a revolver. Those are the kind of targets that were used. On the raid to take out Osama Bin Laden, there were no 1950 back alley muggers in the Pakistani compound. There were, however Islamic men and women. That is not racist, it is fact. OBL was pretty serious about Islam being the best thing ever. He only surrounded himself with like minded individual. Like other Muslims.

If we ever go to war with the Vatican you can bet there will be targets of priests and nuns in Special Operation kill houses. I know that Mother Teresa was a great lady and I was a fan of Pope John Paul, but if our enemy was exclusively Catholic, it would not be wrong to have a cardinal as a kill house target. The messed up part is that there are people who are crying about this current event that would not have a problem with a catholic target. What do you think that says about them?

We also need to clear up a couple misconceptions. The target did not have a verse from the Quran on it. The target was in front of a wall that had the verse in a frame. The reason is because the entire training environment was made up to look like the dwelling of a terrorist or an insurgent safe house. These training scenarios are made to look as realistic as possible. A high level terrorist would not have posters of Dale Earnhardt and a Coors light neon sign.

A lot of people jumped the gun (pun intended) to accuse the Navy of religious insensitivity. If any target was made with a verse from the Quran attached I would say that is a dick move. It is unnecessary and counterproductive to the training. Being insensitive for the sake of being insensitive is stupid. And needlessly drawing attention to the military is stupid. However, that isn’t the case.

That is not the only piece of information some article neglected to mention. There are multiple versions of the target. Some have her holding an animal, a flower or some other nonthreatening object. This is important so that the SEALs are training to look for a weapon, not for a specific looking target. If the is a woman in white hijab with a gun and a woman in a black hijab with a flower, the men would get lazy and just look for the white hijab. This might mean they would make a mistake in a real life scenario and ignore a woman in a black hijab with a grenade.

In a dynamic building clearing scenario that the SEALS would find themselves in being able to distinguish between who is a threat and who is not quickly is very important. The Navy is actually treating women the same as men in this regard. By having both armed men and women, they are saying that women can just as easily fight for what they believe as a man can. 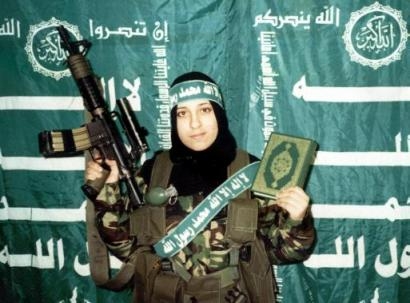 Are women capable of fighting for a cause they believe in or is she just holding the rifle and grenades for her husband like a good little Muslim wife?

The people who oppose this are saying otherwise. On a personal note, I hope that Jihadists continue to think of women as not worthy to fight the infidels. If they did, there would be twice the numbers to fight. Upper body strength is not a factor in pushing a button on a vest or driving a vehicle filled with explosives.

But what about the allegedly enlightened, free thinkers that are up in arms (I meant that one too) about this issue? Aren’t they also saying that it isn’t possible for a woman to fight for what she believes? Jihadists do not think of themselves as murderers, they believe they have the highest of callings. Are we saying that women are not capable of that too?

People are drawn to power and influence and OBL was at the top of his game so to speak. Is it really impossible to believe that at least one woman wouldn’t be attracted to that and share his beliefs? Can people not believe that a woman would fight, and even die for the man she loved and the cause she believed in?

Some of these same people are also saying that women should be allowed in the Infantry. So I guess they are saying that American Christian women can fight as well as a man but that Muslim women can’t. This is a plain and simple prejudice. Based purely on a choice to wear the hijab, people are saying that not only can the women not be fighters, but should be removed from the scenario all together.

Like always, the military is forced to bow to political pressure and conform to the ideals of political correctness rather than focus on doing what it is supposed to do. Defend the country “against all enemies, foreign and domestic.” Nowhere does it specify gender.