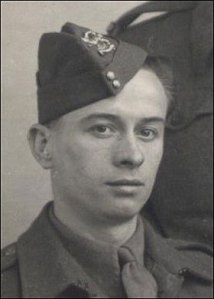 Hero in the making young Private Horace Greasley. One soldier from WWII that can REALLY say, “I’m a lover not a fighter.”

The title of Greatest Generation is given to everyone who fought in WWII. Liberating the world from tyranny was not an easy feat and serving with men of such high caliber it is difficult to stand out. It is like what is considered fast in high school isn’t such a big deal at the Olympics. Some few find a way among the Greatest Generation and their stories are epic.

British WWII vet Horace Greasley died Feb. 4, 2012 at the age of 91. He left behind an incredible story that will be told DTC style. Greasley was a 20-year-old barber in central England when the Nazis started their European World tour. When the Germans entered Czechoslovakia all men of military age were legally able to be called up for duty. A client offered him a chance to get out of it, but Greasley refused and was conscripted as part of the initial draft.

In the early days of WWII, before the U.S. joined the party and made it an intercontinental affair, the British had a few unsuccessful excursions in what would be called the Phony War. Like most combat, it was not real to everyone except those actually on the ground. Greasley was part of a British expeditionary force that landed in France.

He was captured in Carvin, south of Lille on May 25, 1940. Most likely because his balls of steel were slowing him down. He endured a 10 week forced march from France to Holland. Then a three day train ride to prison camps in the part of Poland the Germans had annexed. His second camp was near Lamsdorf and attached to a marble quarry because that is what every war effort needs, a shitton of marble. Even emaciated from being a prisoner, he had the skills to pick up Rosa Rauchbach, the daughter of the quarry’s director. There was an instant and mutual attraction when they met he would later say.

There were a number of obstacles most young lovers do not encounter. Aside from the fact that we was a prisoner of war while WWII was now in full swing. She was the camp’s interpreter and the Nazis frowned on that kind of fraternization. Apparently, the Germans did not do an in-depth background check or they would have found her Jewish roots. Discovery of their romance would mean death for them both.

So they did the sensible thing, they carried on a broad daylight love affair under the guard’s noses. They made the most of any time they could get together. By the end of the year, Greasley was beginning to realize the depth of his feelings for Rauchbach when fate threw them a curveball. Greasley got transferred to an annex of Auschwitz, Freiwaldau, about 40 miles away.
Greasley does the only thing a man can do in these situations, he sneaks out of camp to be with her. Of course, since the nearest neutral border was Sweden about 420 miles away so escaping to friendly territory was impossible Greasley would sneak back into the camp.

He snuck out about 200 times to see Rachbach, sometimes as often as three times a week. They would pass messages through work parties when she was in the area working and messages would be brought into the camp barber shop where he worked. She would also give him food and radio parts for him to take back to camp. The radio helped the camp’s 3,000 prisoners keep up on the news of the war through BBC.

“Had Rosa and I been caught I would have been tortured and probably shot,” he said in an interview, “With her they would have gone right through her family and machine-gunned the lot of them. That was the risk she was taking so we could be together. She was very special to me.”

May 24, 1945, one day shy of five years he was released. He didn’t know she was pregnant when he said goodbye and wrote letters of recommendation to help her get to England. The love story takes a tragic turn because she, and the child, died in childbirth before she could get there.

Greasley was tired of other people telling him what to do so he started a few different successful businesses in his time and retired to Spain with his wife. He sat on the story for over 70 years before having a ghost writer pen the book Do The Birds Still Sing In Hell? Now currently in talks to be made into a major film. Stephen Spielberg and Ron Howard are rumored to be involved.

Horace Greasley snuck out, and back into POW camps 200 times. Heinrich Himmler (in glasses) died the day before Greasley was released for good. Coincidence?

And the picture of him standing up to Heinrich Himmler? He admitted to not know how the man was, only that he was a high ranking Nazi. He is shirtless because he was showing Himmler how skinny he was and was requesting more rations for the prisoner. Because that is what you do when you are carrying on a secret love affair with a Jewish girl that could get you killed, you stand up to the head of the SS and the guy most responsible for the Holocaust.

There has been a lot of talk about Stolen Valor lately (okay, pretty much just military people and vets) and when I hear about someone lying about having an extra ribbon on their uniform I think how I would have been happy if my greatest accomplishment had been to buy Greasley a beer. On online Infantry groups some people talk a lot of trash about how a CIB is better than a CAB. Well Greasley didn’t have either and you still couldn’t hang with this guy. Stories like this also make me want to nut tap every college student that talks about how close to being a vet they are after a long weekend of playing Call of Duty.

I am glad that with the movie coming up the story of Greasley is finally going to hit the mainstream. In the Greatest Generation he stood out as the man that snuck out of a POW camp 200 times and then snuck back in. I like to think that the reason he is shirtless in front of Heinrich Himmler is because cojones that big must put out a lot of BTUs and he was overheating.

8 Responses to Horace Greasley, Surviving WWII Like a Boss