One of the best ranges ever! Outside the wire at BAF. No gear, just shooting out into the open. Just blowing off some rounds and I didn’t even have to clean the weapon later!

When I talk about wanting to go shooting there is always someone that looks down on it. I usually just walk away when they start to talk about how can I enjoy something so destructive. I don’t walk away because I don’t like what they have to say, I walk away because I will never get them to understand that violence is the last thing on my mind what I am at the range. It is something only trained shooters and military members naturally get.

There was a veteran-turned-psychologist that put it best. He was giving a talk to local mental health practitioners and related a story of a former Marine that was having a lot of PTSD related anxiety issues. One day the marine came into the office calm and relaxed. The doc asked him what he had done and he said, “I went shooting yesterday.” People wondered how it can be healthy for a stressed out man to go shooting and be relaxed. The doc asked the crowd what is the first thing you tell someone to help them meditate.

“Close your eyes,” said a voice from the back.
“No,” the doc said, “Vets aren’t trusting enough for that.” I have to admit I nodded when he said that. Then the doc gave away the answer.
“Control your breathing,” he said.

That was it. He compared going to the range to meditating. From a veteran’s perspective, he is right. Breath control is one of the fundamentals of Basic Rifle marksmanship (BRM). I know the Marines have like 27 (okay that might be an exaggeration) but the Army only has four.
1. Body position
2. Point of aim
3. Breath control
4. Trigger Squeeze

I think the Navy has one fundamental, “Call a Marine” and the Air Force might be “Rifles? We drop bombs!” But I digress.

For those that have served, shooting is a meditative process. We seem to love it when Seattle Mariner Ichiro does his little bat dance. He is getting himself in the zone. Nothing matters, not the roar of the crowds, not the runners on base and not even the last pitch. This pitch, this ball, this moment is all that matters.

That is how I feel about shooting. You put me behind any M16 or M4 in the world and I will get the same exact sight picture. My chin will settle into the same spot, my nose will hover the same distance from the charging handle. It is automatic. If you were to take a picture from above on any given day at the range, my prone body will be in the same exact position. The meaty part of my finger will lightly touch the trigger. I will exhale, pause, fire and then inhale.

Nothing matters but that shot. Not the one before, not the one after, just that one round. It is about being totally in the moment. If you are thinking about bills, work, school or even what toppings you are going to get on the pizza after shooting you will mess it up. It is about being one with the gun.

And I mean truly one with the gun. I can tell you as soon as the round leaves the barrel if I shanked it or not. Maybe it was the trigger squeeze, maybe it was breathing, who knows? Okay, it was most likely trigger squeeze. Before checking the target I can tell you if a round is on target or not. By target, I mean in the same shot group. A three round shot group should be the three bullets in an area no bigger than a quarter. If your shot group is bigger than that, you need to fix some stuff.

I can consistently get two out of three rounds in the same hole when I zero my rifle. And if you think that is bragging, know that I am one of the worst shots of my dogtag friends. I know a guy that can shoot a smiley face on a target. I actually saw him do it. We were joking around about how they always do it in the movies and as a joke he tried it. It was pretty awesome.

On my birthday putting holes in paper with friends. If you see a gun nut fixated on killing why are you even on this website? Clearly it isn’t for you.

Artwork aside, there is a calming effect when shooting. It is why I want to get into long range target shooting. Not because I have some unrealized dream of being a sniper, but because it is the most precision based shooting you can do. Factoring in wind and bullet drop and other factors means blocking everything else out. Unfortunately, I don’t have the money to purchase the rifle or the more pricy optics but I will someday. Distance target shooting isn’t about rage shooting, it is about being calm. Controlling the breathing and lining up that one perfect shot. I can’t keep my head clear enough to meditate for 30 seconds, but to fire off a handful of rounds would take five minutes of clarity. You can’t tell me that wouldn’t be relaxing.

There are some people that will still contend that because of the destructive power of a firearm that it is still a bad thing or how guns are used in combat so shooting them it like going to war. I am putting this part in bold so that my military friends can easily find their pace after rolling their eyes.

Shooting at the range is like hitting a golf ball at the driving range. There are techniques that the golfer has to focus on to hit well. Like a shooting range, the golfer can’t be thinking about the last ball or the next one, just this one. Also like a shooting range, hitting balls on range is nothing like actually going out an playing a round of golf. A round of golf has many elements that are not present on the range. You never have to look for stray balls in the grass, there are no sand traps and unless you go to a different section, putting never comes into play. There is no score and each ball doesn’t count on the range.

Just like the driving range, the shooting range does not simulate combat. Have you ever heard of a person hitting a ball at the range, checking how far it went and then switching clubs because they only needed 150 yards to get on the green for par and then putts the last ball off the side? Of course you haven’t because going to the driving range isn’t golfing, it is hitting a golf ball. When I shoot at a target I am not thinking about hurting anyone, I am thinking about my technique. Unlike the movies where the hero shoots a nice circle in the middle of the man sized target and then puts up a new one, I try to get the most bang for my buck (pun intended) by shooting the entire target. While I start with the center, I will often then switch to aim for the number 7 on the circle. It is about having a good shot group, not doing kill shots. 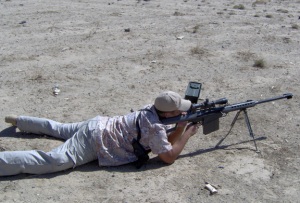 Actual conversation (summarized)
John: Have you ever shot the Barrett?
Me: Yeah, a couple times in Afghanistan
John: It is fun to shoot.
Me: Yeah
John: You press “X” to reload.
Me: Get out.

It is also pointless to look at a target and talk about how much damage that would have caused when you put 20-30 holes in it. Another reason why going to the range is nothing like a gunfight, no one is going to stand at the distance I tell them to in clothes that contrast from the background and stand still (and upright) while I put a few dozen holes in them. Also, it is illegal to shoot someone that is at some of the distances you can put targets at most shooting ranges.

That is how military people feel about shooting. It is about as far from combat as you can get. It is just like pulling a club out of the car, buying a bucket of balls and going to town. It is fun because it is safe and not a danger to anyone. Aside from the meditative properties, it is just fun. If the only think you have against guns is philosophical, then you need to go you the nearest military base and beg them to let you shoot off some rounds at full auto in a safe, controlled environment. Seriously, if you have never had a gungasm (this is the second time I have used this word) you need one. I still blow off a magazine at the range just for the release

Guns are dangerous and are not toys. And I shouldn’t have to get into that this isn’t the place for a discussion on gun control or responsible gun ownership. Military service members and veterans like to shoot. Not because it keeps our trigger finger itchy or it reminds us of killing, but because it takes the skills that we learn and turn them toward something that is safe. It is what we are good at and no matter what firearms are used for overseas or in the hands of others. At the range, it is a relaxing time. With what we go through, I think we have earned it.