POG is a Mentality not an MOS 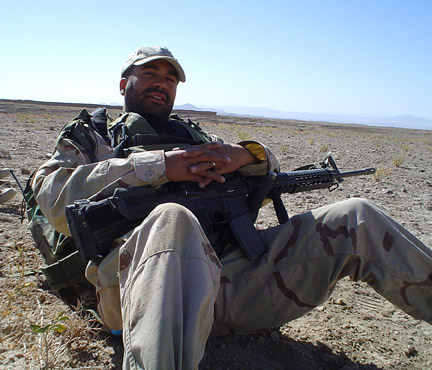 Earned blue cord but reclassed to PSYOP. Here he is on a mission with SF waiting on the Chinooks in 120 degree heat with 75 pounds of gear and bang. Grunt or POG?

Even though it was a couple of years ago, the Why Grunts Hate POGs post is still getting hits so it must resonate with a lot of people. Maybe it is time for a follow-up or an update. The article was a stand-alone piece about one specific issue, literally why grunts hate POGs, but there is much more to the overall topic. Most importantly, just because someone isn’t a grunt doesn’t necessarily make them a POG. It was stated in the article, but many glossed over it.

While POG literally means Person Other than Grunt, calling someone a POG has become an insult that is more of a reflection on the person than their job. It is kind of like jocks v. nerds in high school. Not every 11-series self identifies as a grunt and not every student athlete calls himself a jock. Like the term grunt, jock has a particular connotation. Just because someone isn’t a student athlete doesn’t mean he or she isn’t athletic. A student that boxes or practices MMA off campus might be in better shape than most football players but because it isn’t a school sport he or she might not be considered a jock. Students don’t get letterman’s jackets for sports outside the school but that make that student a nerd. In the same way that Special Forces soldiers are technically POGs but I wouldn’t call one that to his face.

Being a grunt means embracing the grunt mentality and way of life. Many soldiers that have graduated Infantry School might not call himself a grunt because he doesn’t see himself as the stereotypical grunt. I know a lot of very smart men in the Infantry, but most of the men I know that identify as Infantry do not call themselves grunts and that might be because of the negative image.

Being a POG is more of a mentality than a MOS. There are even Infantrymen that exhibit POG behavior. Someone that is a POG is a soldier that doesn’t do their job to be part of military team. It is the mechanic that makes a driver do work that mechanics are supposed to do because they are lazy. It is the supply guy that makes people beg for items they are free to issue. The quintessential POG is the armorer that rejects every weapon for the tiniest speck of dust but will accept everything without a cursory glance after 1600.

Anyone that looks for reasons not to do their job that impacts another soldier is a POG. A soldier that takes a nap in his vehicle instead of doing his Monday morning garrison PMCS is just trying to get over, the S1 trooper that turns away a soldier to out-process at 1050 so he can take a long lunch is a POG. Another easy way to spot a POG is with his large wings of a bluish hue. Yes, the infamous Blue Falcon is almost exclusively a POG. The Blue Falcon, or buddy fucker for the uninitiated, is the lowest form of life in the military.

So how can someone not be a grunt but also not a POG? By doing their job and acting like a part of the military team. Honestly, there are many of them out there. The supply guy that hooks up others in the Spec-4 Mafia to make sure that everyone can get their missions accomplished, the PAC kid that will take your paperwork when everyone else in the office wants to take an early lunch, the commo guy that will take the time to explain something and most importantly, the armorer that won’t reject any legitimately clean weapon the first time. Those are not POGs.

When the Army stole 20 days of leave from a soldier and the S1 wouldn’t lift a finger to help, those guys were POGs. When a soldier returns from 10 days of emergency leave after burying his grandmother and the S1 soldier quietly round files the leave form that S1 trooper is not a POG. It might have been breaking the rules, but you can bet that grunt would remember that. And that is what being in the military is all about, taking care of one another.

While one Internet post won’t change the military mentality it is important to state that just because someone is not a grunt does not mean that POG as a derogatory term should apply to them. Especially since some are pretty hardcore. Medics in the Ranger Battalion are pretty hard and shouldn’t be called POGs. Someone thing goes for commo troops and forward observers that roll out with SF.

When you break it down POG has become a derogatory term used by Infantry to describe those that don’t have the same attitude of loyalty and teamwork as is found in the Infantry world. An Infantryman can’t tell someone that is in need of his skills to come back later. No mortarman is going to reject a call for fire because he is on a lunch break. While it is true that many jobs in the military are not life and death, if the person takes it seriously and does their job they are not a POG. That term should be saved for those that show true POG behavior. But what do I know, I’m just a grunt.

12 Responses to POG is a Mentality not an MOS